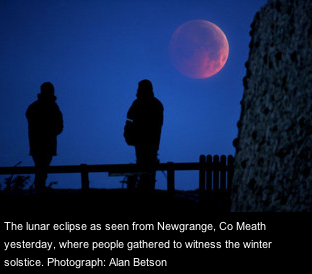 Thousands of people trying to make it home for Christmas were given a boost this morning when Dublin airport resumed operations – http://tinyurl.com/3adhpbo

The dangers of talking on a mobile phone while driving were highlighted by a coroner yesterday at an inquest into the death of a man who was on the phone when his car hit a tree – Georgina O’Halloran. http://tinyurl.com/2wpr23c


The man who set a Guinness world record thirty years ago when he plucked a turkey in one minute 30 seconds on RTE television remains unbeaten today, despite several attempts. – John Spain http://tinyurl.com/35q7v2t

The Indian government is facing an ‘onion crisis’. The price of the vegetable has doubled, forcing the government to ban exports, restaurants to scrap onion dishes and causing widespread consternation among voters. – Rhys Blakely


Managers are confident in their own businesses despite increased concerns about the wider economic environment, according to an IBEC survey. – Business in Brief

Eircom and Digiweb Group have announced a new partnership that will enable Eircom to resell Digiweb’s Tooway Satellite broadband service across the country.