Two pieces of great coverage for our clients in the Sunday Business Post this weekend. 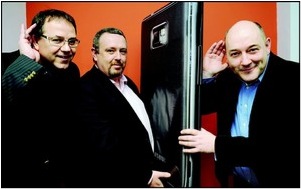 We feel naked without our smartphones,” said Google co-founder Larry Page during his company’s quarterly earnings call last week. “We live in a multi-screen world – people carry around a supercomputer in their pocket all the time.”

In Ireland, mobile commerce – ‘m-commerce’ to some marketers – accounted for 11 per cent of total e-commerce sales last year, an 81 per cent increase on 2011. An upcoming conference on mobile commerce, to be hosted by the Dublin-based Digital Marketing Institute on February 7, aims to explore the merits of mobile marketing from a variety of perspectives.

“Many challenges lie ahead of us at DoneDeal when it comes to mobile, largely down to the myriad of devices that we’re now working with,” said Warburton, who will address next month’s conference. “Within that myriad, there’s a second myriad – operating systems those devices run on.

“The second challenge that mobile presents us with is behavioural. The way media is consumed on mobile is vastly different to web generally.” DoneDeal’s busiest day of the week, was Monday, “forever”, according to Warburton, until the advent of mobile internet. Now, it’s Sunday.

“Weekends are no longer quiet. They’re the exact opposite, in fact,” he said. “People are consuming media on phones throughout the day and into the night and throughout the weekend – advertisers now understand that time of day has become very important. Supermarket advertising at 6pm on a week night will work better than at 10am on a Saturday.”

Warburton said that Irish consumers were “early adopters” of technology, but brand owners, media owners and media buyers were somewhat behind the curve. “32 per cent of online activity is via mobile in Ireland, significantly higher than the European average, which is 21 per cent,” he said. “But advertising spend isn’t mirroring that.”

According to gaming entrepreneur Dylan Collins, it’s only a matter of time before ad spend aligns itself with mobile use and engagement.

“Gaming drives a lot of advertising, across a lot of platforms – it’s the biggest revenue generator in the mobile app world. Tablets are the new consoles, which puts us in an interesting position,” said Collins. “Everyone is going to end up on either mobile or tablet, or both. Engagement via mobile is three times higher than on other devices and, while the advertising spend is in inverse proportion to that for now, it will change.”

Collins, also scheduled to speak at the conference, said that mobile remained a “tricky” area, especially when it came to display advertising. “A lot of that sucks at the moment,” he said. “Some companies are managing it okay, but the better ones are figuring out how to integrate ads smoothly and effectively. It’s definitely a challenge to monetise mobile beyond transactions, but companies like Kiip are doing a good job.”

Kiip – pronounced ‘Keep’ – is a global advertising holding company that gives rewards in the form of digital coupons (sponsored by high-profile brands) when a milestone is reached in a game. Reward redemption gives brands a chance to connect with a demographic cohort that ignores ads for a living. Partner brands include Pepsi, McDonald’s and Sony.

In order to reach consumers effectively, Collins said brands and businesses had to adapt to the medium. “A reduced screen size is challenging, whatever the call to action. In terms of the mobile experience, less can be more. Cramming in functionality because you can isn’t a good idea. It’s really important to prioritise usefulness of function.”

Collins will be joined at the conference by Dermot Daly, managing director of mobile app developer Tapadoo, who said he was wholly opposed to the blind rush into the app space by brands.

“It normally manifests itself in two ways,” said Daly. “Brands with no need for an app want one of the sake of it, or brands which need a suitable app are tempted to add the kitchen sink to it. When we meet prospective clients, we assess the need for an app, the motivation behind it.”

If you put your business objectives ahead of the mobile user’s objectives, your app isn’t going to work, Daly said.

“That always raises the question: why aren’t those objectives the same in the first place? They should be; it’s weird if they’re not. We want to work on stuff we like working on,” he said. “The installation of an app is a thoughtful commitment by a consumer; they’re allowing the brand a presence on their precious device. With great power, comes great responsibility.”

Website experiences tend to be “drive-by” and thus resound less with users, said Daly, whereas an app is very much about marketing and may be the first genuine encounter a user has with a brand, which sets the tone.

Ian Dodson, chief executive of the Digital Marketing Institute, said that brand owners would do well to remember that mobile was not so much a channel of communication as a platform on which to interact and negotiate with consumers.

“As consumers, mobile liberates us – the evolution of the web comes down to the evolution of consumer control, really. Marketers’ heads are spinning. ‘Does this look good on mobile?’ is the question we have to start asking more regularly. We’ve got to be designing for mobile by default.”