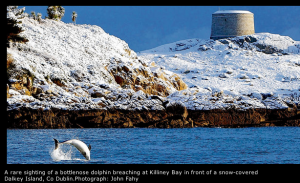 The international fallout from the release of hundreds of thousands of US diplomatic cables by whistleblower organisation, Wikileaks, continued yesterday, as Washington scrambled to limit the damage caused by the leaks, write Mary Fitzgerald and Lara Marlowe. http://tinyurl.com/2dqmoee

The Growing up in Ireland Study, published yesterday by the Minister of State for Children, Barry Andrews, shows that 20% of women drank while pregnant, with the highest educated most likely to do so, writes Kitty Holland. http://tinyurl.com/262cwo5


Dublin has no budget for extreme weather in 2011, writes Olivia Kelly. http://tinyurl.com/25uhwhc

Growing Up in Ireland, a study carried out by the ESRI and Trinity College, has found that 60% of mothers of nine-month-old children are working outside the home and 12% of grandparents are minding the children, writes Eilish O’Regan.  http://tinyurl.com/2fxhfq8

Call of Duty: Black Ops, a videogame released on the 9th of November, drew sales of €360 million on its first day, more than either of the blockbuster movies, Harry Potter and the Deathly Hallows and The Dark Knight, writes Ronan Price. http://tinyurl.com/2agkmrz

A survey by online dating agency, OkCupid, showed that owners of an Apple iPhone had more romantic adventures than users of other phone brands like Blackberry, writes Darragh McManus. http://tinyurl.com/289q4ke

Piece by Carissa Casey on three ordinary business people who are showing us the way forward; Rani Dabrai, whose company does outsourced administration for businesses, Adrian McGibbon, founder of Swish TV, which broadcasts weddings over the internet and Darragh Verschoyle, whose company, Dropp.ie, builds websites for other companies for free and only takes a percentage of the profits earned as payment. http://www.independent.ie/topics/Carissa+Casey