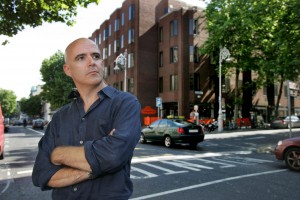 Conor Pope is a travel and consumer affairs journalist with The Irish Times. As well as writing the Pricewatch section of the paper he also runs a Pricewatch blog. Here, he discusses his Twitter addiction, how he talks to up to ten PR people a day, as well as his Mexican holiday hell.

How did you end up becoming an expert on consumer affairs?
Ah I wouldn’t call myself an expert on anything, truth be told. I ended up specialising in this area through an act of total randomness for which I will be eternally grateful to one person – let’s call her Madeline (because that’s her name). I started working for The Irish Times website back in 1996 and while I had a fairly senior role, I was doing very little writing which made me just a little glum – as the only reason I got into journalism was to write.

To lift the glumness, I started submitting the occasional feature to the main newspaper on entirely random topics such as yoga classes for troubled kids in north inner city schools, my snake hell in Western Australia and fourth generation Irish-Argentineans looking for Irish passports so they could escape their country’s basket case economy (remember when we had an economy worth escaping to? Good times).

Through those pieces I got to know the features editor and about six years ago she was looking for someone to do short product reviews for a tiny feature at the bottom of a Friday page. Her deputy – let’s call her Madeline – suggested me, lord knows why, and away I went. Incidentally, the very first thing I reviewed was sausages – Hicks came out on top. The following week I was asked to handle a couple of readers queries on consumer issues and slowly this tiny feature grew into a half page, then a full page and now two pages. On the back of the Pricewatch reviews, I was asked to do a once off item on the Ray Darcy show five years ago and they’ve not been able to get rid of me ever since. See? Totally random.

Do you practice what you preach?
Oh absolutely! Ha! My dad died in 2002 but I think he’d find it hilarious that I now do what I do given that he spent all my life bailing me out and paying for my wanton excesses.

What is the worst rip off you have ever covered in Pricewatch and did the situation improve after you wrote about it?
Drugs in Ireland are shockingly expensive. This applies to both prescription and over the counter medications. One reader contacted me a while back to say he could travel to Barcelona, stay in a four star hotel for four days, buy a year’s supply of an anti-reflux drug and eat and drink all around him for 300 quid less than the drug alone costs him in Ireland. A year’s supply of low dose aspirin costs 8 dollars in the US and is available over the counter. The same drug is only available on prescription in Ireland and when doctors visits are factored in, the drug costs over €250 a year. I have written at length about this but I am not sure it has made any difference. Actually I am pretty sure it has made no difference.

The other big rip off has been the price discrepancies between Ireland and the UK. I think the media attention on this has made something of a difference and we have shamed some retailers into narrowing the gaps. Others have kept the gaps as large but removed the dual pricing stickers they used to have on their stock, which is, I think, very sneaky.

Do you think Irish companies, in general, have good standards when it comes to customer service?
I’d be tempted to say ‘What! Are you crazy?’ at this point, but that’d be a bit unfair. Some companies do have good standards; some would make a grown man cry with their sheer uselessness. Restaurants and hotels in Ireland are good, some supermarkets are very good, broadband companies on the other hand, make me want to break things. And some airlines are, well, difficult.

Do you think that Irish consumers have become more savvy and assertive over the past two years with the toughening economic times?
Oh undoubtedly. We’re all Eddie Hobbs now!

In light of the bailout, what advice would you give to the Irish public for keeping their finances in order and avoiding the worst of the snip in 2011?
I would advise the Irish public to buy my book: Stop Wasting Your Money, a snip at only €9.99. Actually, that’s a joke, the book is out of print, although I do have a box under my bed that you can have at a knock down price – or indeed, free, if you want it. The grim reality is that a lot of people will find it all but impossible to keep their finances in order this year because of tax hikes and wage cuts and there is for many there is nowhere left they can cut back. More and more people are going into debt, falling behind on mortgage payments and struggling to keep themselves afloat. It is very depressing.

How much of your job involves dealing with PR companies?
I’m on the phone to PR companies between five and 10 times a day and get about 50 emails daily so I guess you could say a lot.

What role can a PR Company play in helping a company they represent deal with consumer issues or complaints?
I would say PR agencies have a pretty crucial role. Here’s why: when I contact companies, it is very rarely with good news – okay, okay, it is never with good news. I’m always ringing up to give out on behalf of a listener or reader. Sometimes the queries are minor sometimes they are very serious and potentially very damaging to a company’s reputation. Good PR companies are less emotionally involved when it comes to handling such complaints, are used to dealing with the media and recognise when it is appropriate to hold up their hands and admit their client screwed up and when it is better to fight their client’s corner. They also give journalists direct access to the people that matter in a company so problems and complaints can be resolved faster which, when it comes to what I do, is always in the best interests of everyone.

You are also a travel writer. What travel destination would you most like to cover?
I have been very lucky to go on some amazing trips over the past couple of years and I can’t tell you how much I love that aspect of my job. I mean, seriously, imagine being sent to Las Vegas for 72 hours to play poker, drink cocktails and take a helicopter into the Grand Canyon and then getting paid to write about the experience? How mad is that? It’s like winning the Lotto.

As a travel writer, you’re probably asked to go on a lot of press trips, how do you choose which ones to cover? Do they always get a positive review?
I am asked to go on a lot of trips but turn most down – it is not, after all, my full time job so I can’t be jetting off for weeks on end. I don’t really have any criteria for accepting or rejecting them, it is mostly down to my capricious whims although I am fan of sunniness, particularly in the winter. The places I go most certainly do not always get a positive review. I would see it as a tragic waste of my time to travel half way around the world to write a puff pieces about some god forsaken place. It would be of no value for our readers and would be completely dishonest. I think you have to write about your experiences as they happen and you can’t gloss over the negatives. I went to Cancun last year and while there was some very nice things about it, I was brought over in the middle of spring break. It was like the seventh circle of hell. The town centre at night made Temple Bar on St Patrick’s Night look like the corridors of a Poor Clare convent. Thousands of young Americans plastered on cheap cocktails, doing “sexy dancing” shouting Boo Ya and puking is not a nice thing and to describe it in a positive way would not have been possible.

You’re an active Twitter user. Do you find Twitter useful as a journalist? In what way?
I am not proud to admit that I am totally addicted to Twitter. Not only is it a brilliant source of breaking news – admittedly it can’t be relied on and should never be used as a primary source – and an excellent way to make contact with people with interesting stories to tell, it has also transformed the way I watch the TV. It has turned watching the Late Late Show from a depressingly solitary experience into a communal act where thousands of people can simultaneously bitch about the choice of guests and the line of questioning.

You also write a Pricewatch blog, do you think that online media is becoming more important than print?
I think they have different roles to play and both are equally important.

We see from your Tweets that you’re a fan of the Incredible Hulk. What awakens your inner Hulk?
Don’t make me angry. You wouldn’t like me when I’m angry.