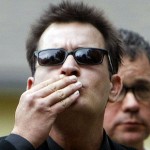 1. Whether you think he’s deranged or you secretly admire his chutzpah, actor Charlie Sheen has become a media sensation, breaking world records by becoming the fasted followed tweeter ever. He attracted up more than a million followers in one day and now he’s going to be paid for his tweets. http://tinyurl.com/6ytaeae


2. A good week for Apple. The iPad2 was unveiled, Steve Jobs makes a surprise appearance and the reviews all round are very favourable. http://tinyurl.com/6ey9o8m

3. Like socks and car keys, USB sticks have a habit of disappearing and not being in the last place that you left them. According to a US report, they are however, turning up in their multitudes in laundrettes. http://tinyurl.com/62ght68

4. eircom plans to increase its number of Wi-fi hotspots around the country, growing its network from 1,000 to 4,000. http://tinyurl.com/6jmvw7v

5. As the situation in Libya escalates, it appears that the country has removed itself from net space with no net traffic in or out of the country. http://tinyurl.com/4smqtta

6. Director Steven Spielberg has secured the rights to two books about Wikileaks, written by two of its journalists. Former child star Macaulay Culkin is tipped to play Julian Assange. http://tinyurl.com/6zt2pme

7. According to a recent survey, tech execs are most likely to get their industry news online but nearly half read print journals at least once a week. http://tinyurl.com/6kqs8cg

8. Privacy issues arise for Facebook once again, as the company is to make users’ names and phone numbers available to apps that are used on the site but only once explicit permission is given. http://tinyurl.com/4k5lz5b

9. Publishing company Bloomsbury has declared 2011 ‘the year of the e-book’ and it seems that those in the 50+ age group are driving sales. http://tinyurl.com/648qtwb

10. The addictive app Angry Birds is getting Irishised for St. Patrick’s Day. There are few details yet but we wonder, could it possibly be a drinking game? http://tinyurl.com/5ub5awn