The Irish economic crisis has led to a huge drop in the standard of living. Eurostat findings show prices are 31pc higher than the EU average – Aideen Sheehan. http://tinyurl.com/33e2x4y

The success of ‘The Tudors’ and ‘The Secret of Kells’ has been central to a record year for the Irish film and TV industry – Kevin Keane. http://tinyurl.com/37hd2tk

Business brain this week tells us how to keep on top of emails.

Peter Flanagan on Ireland’s young, gifted graduates who are fleeing in search of work.

John Kennedy looks at the industries of tomorrow that will put our economy back on track. 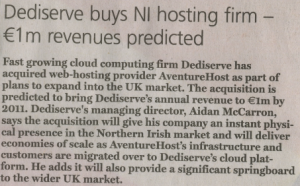 The website of the Swedish prosecutor’s office, which was behind the arrest of Julian Assange, founder of WikiLeaks, came under cyber attack during the night and was out of action for about 12 hours. A British court will decide whether Mr Assange can be released today on bail. – Reuters http://tinyurl.com/2btlz73

Researchers in Dublin analysed a sample of 70,000 tweets in real time during the X Factor to gage public sentiment. One Direction were neck-and-neck with Matt until they were evicted. – Radar http://tinyurl.com/26yjeuj

Limerick-based comedy duo Rubberbandits might make it to Christmas number one with their song ‘I’ve got a Horse Outside’, which has received 1.5 million hits on Youtube. – Sinead Gleeson http://tinyurl.com/2err669

Siobhan O’Connell on the need for a marketing campaign to rebrand Ireland in Media and Marketing. http://tinyurl.com/37ax223