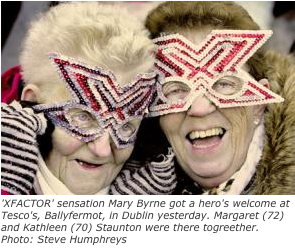 Shops set to re-open on Stephen’s Day in an attempt to boost sales following a rough year – Aideen Sheehan. http://tinyurl.com/3897yjc

Ryanair will slash the number of flights it operates from a number of German airports next summer in response to the German government’s €8 passenger travel tax that takes effect from next month – John Mulligan. http://tinyurl.com/37k8k2v

WikiLeaks founder Julian Assange will be held in custody for two days in Britain as Swedish authorities appeal his request for bail – Mark Hennessy. http://tinyurl.com/28wo5yj


HMV has sold its store on Oxford Street in London to cover losses of over £41 million for this year amid fears that the company could be forced to close. – Fiona Walsh http://tinyurl.com/246sxro