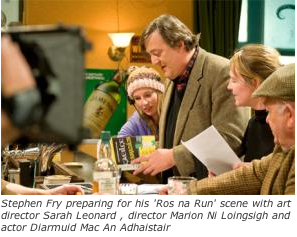 Regular use of mobile phones in pregnancy could increase the chance of youngsters suffering behavioural problems, new research out yesterday suggests – Jane Kirby.

Nearly 60,000 may emigrate next year to seek work.

Ronan Price on the battle of the ebooks this Christmas. http://tinyurl.com/32om36f

Frightening newspaper front pages can harm children, a Norwegian child psychologist has said – Fiona Gartland. http://tinyurl.com/2uzory5
There will be an Office Christmas Party for the Unemployed on December 20th in the Grand Social venue (formerly Pravda) in Dublin city centre at 8pm. The event is organised by 26-year-old freelance photographer and club promoter, Damien Glynn, who says, with unemployment reaching 13.4 per cent and many of his friends leaving the country to find work, there has never been a better time for a festive shindig to relieve the gloom – Edel Morgan. http://tinyurl.com/32pcjxe

The number of broadband connections in Ireland is down, according to new data from the Organisation for Economic Cooperation and Development (OECD) – John Collins. http://tinyurl.com/33bvqje

Health Plus –
Psychologists believe Facebook taps into primal drivers of human behaviour such as the need to be accepted – Eoin Burke Kennedy. http://tinyurl.com/2wvc5j6