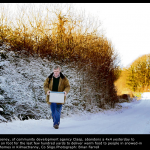 Praise for those who are looking out for their neighbours during the cold snap.


Anna Carey on how Twitter is turning TV watching into a communal activity, giving rise to conversations about everything from reality shows to current affairs. She asks, will it change the way TV programmes are made in the future? http://tinyurl.com/2f7z55n

Budget 2011 explained in a special supplement.

Irish obesity levels in Ireland amongst highest in the EU – Eilish O’Regan. http://tinyurl.com/363eo2n

Children with TVs in their bedrooms fare worse in recent OECD survey on education – Katherine Donnelly.