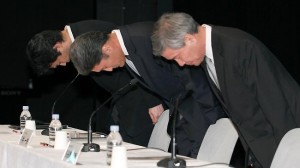 1.Sony has been hit by a second major security breach. The company announced that another 25 million users’ details have been stolen after Sony Online Entertainment was hacked, in an attack that predates the PlayStation Network hacking.

2.Twitter has bought Tweetdeck for $40-$50 million, according to reports. Tweet Deck had previously been in talks with Uber Media, which was close to buying the company for a figure in the region of $24-$30 millions.

3. An investigation by two NGOs has revealed that young workers in an Apple factory in Southern China are working in difficult conditions and exploitative conditions.

4. Osama bin Laden’s death broke Twitter records. Over a period of an hour, there were 3,000 Tweets per second regarding it, peaking to 5106 when President Obama made his address.

6. The Irish government is being called upon to open up all data to its citizens. Joan Mulvihill, CEO of the Irish Internet Association says that an open data policy would benefit everyone, including citizens, government and entrepreneurs.

7. A new survey has revealed that more than 1/3 of tech companies will check prospective employees social media profiles. 38 per cent of the 660 senior level executives surveyed have used Facebook etc,. to determine an interviewee’s suitability.

8. In the United States, the internet uses more electricity than the auto industry, it has been revealed. The internet accounts for 2 per cent of electricity consumed, while the recession has seen a decrease in industrial clients’ demands.

9. The White iPhone 4 is not thicker than the black model, despite claims to the contrary. So is there any difference? No, just the colour…The device went on sale in Ireland at the weekend.

10. A new poll of 30,000 respondents has found that Google is the most reputable company in the US. Apple was ranked fifth and Microsoft 16th, while General Motors, BP and Bank of America ranked lowest.