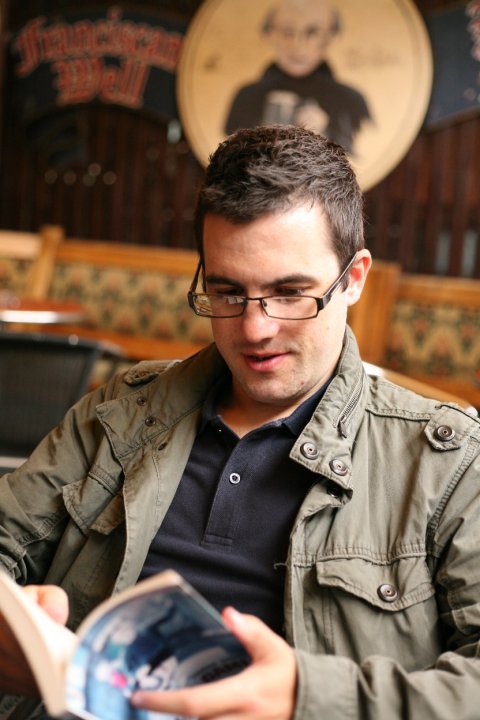 For our Ask-a-Journalist slot this month we spoke to JJ Worrall – a freelance technology writer who is commissioned on a regular basis by the Irish Times, Sunday Business Post and ComputerScope.

JJ has been writing for newspapers and magazines since he was 19 and has focused on technology since 2008 – but he’s not all geek, as he writes for online music sites and reviews albums on FM station Phantom.

In this interview JJ tackles the big questions of whether print can survive in Ireland, the importance of Twitter and his top 3 albums.

What is your media background?

I’ve worked for various newspapers and magazines since I was 19 when I started writing for the Sunday Independent and The Big Issue, eventually becoming a staff writer with the latter for two years. Then I spent a year with the Consumers’ Association of Ireland magazine, Consumer Choice, did some travelling and then worked as an online editor with Yahoo! Ireland (I’m never sure whether to put the exclamation mark on that one when I mention it) for 18 months before going freelance in 2005 and I’ve been working for myself since then.

I’ve been more focused on writing about technology since about 2008 and at present I’m a regular contributor to The Irish Times, the ‘Computers in Business’ supplement with the Sunday Business Post, ComputerScope and online publication Idea.

I’ve also written for music site State.ie, filled in as editor with HeinekenMusic.ie and made a good few appearances on Phantom 105.2 where I’ve reviewed albums and taken part in the occasional on-air arm-wrestle (long story).

What is your typical working day?

At the minute it involves being in front of my laptop at about 8.30 in the morning, checking news headlines and going through the list of things I have to do that day. Other than that, the idea of a typical day doesn’t really apply. Sometimes I’m writing from the minute I get up until 6pm, sometimes I’m trying to track people down for interviews and there are plenty of days where I’ll have to go back to my desk to work again later on in the evening.

After a few years working full time from my apartment I’ve now moved into a co-working office space in Sandyford three days a week which is a nice change too. There are web developers, IT professionals and lots of other people working for themselves in there and it’s good to bounce ideas off them. I don’t think I’ve ever spoken to anyone who works from home who hasn’t mentioned the phrase ‘cabin fever’ so when I am at home all day I’ll head out for a run at lunch if I get the chance or else bring the laptop down to a local café to work from there if possible.

Did you always have an interest in technology or did it develop over time?

It definitely developed over time and I’d say the biggest reason for gaining a real interest in it was a series of articles I did for the sadly no-longer published, PC Live. I was asked to interview different academics each month who were working on Science Foundation Ireland-funded projects. It was great to meet people who had these big ideas and absolutely loved what they did. It prompted me to gain a greater understanding of technology as I wanted to make sure that the articles I produced gave an accurate and educated explanation of what these people were working on.

Is it important for your job that you have the latest mobile phone/computer?

It’s never really been a major concern to have the latest phone, laptop, tablet etc – I’ve had the same HTC phone for the past year and (despite the odd glitch) it works fine and I replaced my laptop last August after four years of fine service from a relatively cheap Acer model. Though, to be fair I went for a Lenovo Ideapad this time out as, after Apple, they tend to come out on top in terms of reliability and usability whenever there’s a rundown of the best notebooks on the market.

What do you think are the most interesting technological developments/launches over the last year?

I’ve written a lot about security this past year so the headlines that have really grabbed my attention have usually been focused on cybercrime. The New York Times allegedly being spied upon by the Chinese government was a great story for instance, then there’s the LinkedIn-style hacks, the Flame virus and plenty of others. Other than that, there was the launch of the Wayra Academy – which is backed by O2/Telefónica – where ten Irish start-ups got €50,000 each in funding alongside some pretty cool office space in the O2 building along the Docklands. The more development hubs like that which can be created around Ireland the better.

Are you on Twitter and what do you use it for?

Yes and aside from rambling on about sport I use it as a reference for what I should be reading – both for work and in my spare time. I’d keep an eye out for tweets from certain people or organisations that have provided interesting stories or reports in the past, keep up to date on the news and then mark off articles to read when I get the chance. Plus I always find with interviewees who are hard to get a hold off, Twitter is a good place to get their attention.

While some people will wait until the end of the day to check voicemails or just scan through emails because they’re too busy, people are so addicted to their smartphones these days that they’ll usually check Twitter every hour. Maybe because it’s a social network, interacting that way still seems less like work for them.

Do you believe print can survive?

In an Irish context it’s a very small market and with only so much advertising out there, there will be titles that go out of business, though whether it’s here, the UK, the US or elsewhere I think the main titles will survive for a long, long time.

Papers still make the bulk of their profit through what’s printed each day rather than the links on their site, so the death of that business model will probably be a while away yet.

What are your most visited websites?

Thankfully I can give both a politically correct and accurate response here and say that I’d visit The Irish Times site every morning and BusinessPost.ie a good few times during the week. Otherwise there’s The Guardian, Cnet, New York Times, Twitter, the LA Times tech blog and RTE. Any unproductive afternoon tends to have something to do a combination of the following: Football365, EmpireOnline, Balls.ie, Broadsheet.ie and NFL.com.

Who has been your most inspiring interviewee to date?

I’m a complete geek when it comes to discussing how to write and so from a selfish point of view I’d say interviewing Paul Kimmage about his work on Tony Cascarino’s autobiography ‘Full Time’. Discussing how to construct an entire book with a coherent narrative (it’s still one of the best sports books I’ve ever read) from hours of interviews was fascinating to listen to. Journalists interviewing journalists is a bit on the incestuous side though so I’ll also mention an interview with Robert del Naja from Massive Attack which was fantastic, and then on the tech front there was Bill Buxton from Microsoft. He’s principal researcher there and basically leads the company when it comes to deciding the right direction for user experience. I was supposed to chat to him for 30 minutes but we talked for over an hour-and-a-half, mainly due to the fact that he put a lot of effort and thought into every question answered.

Do you think the tech sector in Ireland has a good future?

I think a lot depends on education – retraining people to work in the sector to start with but most importantly I think there has to be way more technology-focused coursework in schools. I’ve talked to principals, teachers, parents and tech leaders about this and they’re all concerned that not enough is being done. The fact that the phrase ‘smart economy’ was invented in a decade where people basically abandoned technology-focused third level options sums up how incorrectly the education system was being run in those years.

How much of your work involves dealing with PR companies?

Maybe 10% – I’d deal with a good few PR companies almost every day though it usually just involves a quick call or email.

Do you read every press release that is sent to you? And what ones do you/ don’t you?

I try to but if there isn’t an interesting title I am guilty of just marking it as ‘read’ quite a bit. If there’s a jumbled subject line with no clear message it’s really hard to justify looking at it, or if it’s just emphasising common sense (‘Mobile devices set to be big influence in the office of the future’ etc) then the chances of me reading it are minimal.

In my experience the ones that fall into that category tend to continue that lack of a message throughout the email. Also, the words ‘Under Embargo’ always make me suspicious to be honest, I’m not sure I’ve ever read a mail with that in the subject line that’s been overly interesting. If something is actually worth holding on to then companies won’t talk about it a week beforehand to drum up interest.

As for what I do read, as I work for a good few titles my workload is pretty varied so I give the majority of press releases a chance as there could be something there. If the heading and first paragraph have kept me interested I’ll read the rest.

What makes a story pitch interesting to you?

A clear and concise idea and something that provokes argument. If there are a few different approaches to tackling a subject, and differing opinions on it out there it usually makes for a good article.

If you weren’t working in journalism, what would you like to do?

I’ve always been pretty interested in psychology, so maybe something to do with research in that area. I find it hard to think about having a career where I didn’t write though – so the first things I actually thought of when the question was asked were screenwriter or script-doctor.

JJ’s Top 3 Albums of All Time. Do you agree with him?