The appointment of digital industry heavy hitter Ken Fitzpatrick as CEO of the Digital Marketing Institute was covered by national print and online business journalists this week.

The news was also well represented in the press with The Irish Times, Examiner, Metro Herald and Sunday Independent covering his appointment.

This is the news release documenting his appointment:

Fitzpatrick was CEO for a number of highly successful and high growth digital businesses, including the Denis O’Brien owned Saon Group, and more recently Irish digital agency Simply Zesty. Now Ken Fitzpatrick has been appointed as CEO of the Digital Marketing Institute.

Taking over the running of the company from current CEO Ian Dodson and Managing Director Anthony Quigley, Fitzpatrick will be responsible for spearheading the company’s ongoing international expansion and establishing its programmes as the global standard for digital marketing education. His day-to-day role will involve all areas of the company, from the operational side through to business development.

Most recently Fitzpatrick oversaw the successful sale of digital agency, Simply Zesty, to UTV Media. Fitzpatrick was also Group CEO of Saongroup.com for two years (until February 2008) – a global business owned by Denis O’Brien and Leslie Buckley and a world leader in online recruitment. Under his tenure Fitzpatrick grew staff numbers to over 800 worldwide across 22 different businesses with revenues exceeding €28m. He also developed and led the group’s international expansion strategy, which saw the group complete 9 acquisitions, 5 start-ups, and enter 7 new markets in just 18 months. 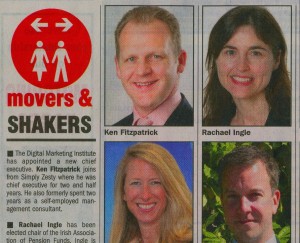 “The Digital Marketing Institute’s goal and ambition is to be the international standard for digital marketing education. Our focus, through the support of Enterprise Ireland, has been on international markets for some time. To date we’ve achieved good traction and success, growing the company from 2 people to 24 people. Now we’re entering a phase where we need a strong hand at the helm to take advantage of the domestic and overseas opportunities that exist for this business as it moves from a small business to a medium sized enterprise with global traction and ambition.”

“As entrepreneurs we need to let go, we can only take a business so far. We wanted to bring on board someone who had significant international experience positioning Irish companies in the global marketplace and we’ve found this in Ken.”

“To be joining the growth story that is the Digital Marketing Institute is a very exciting prospect. The business has expanded significantly both domestically and internationally and I’m delighted to be joining the team to bring the business to the next level.

I believe that digital marketing is a key economic driver in most developing and maturing economies and the Digital Marketing Institute is right at the heart of that with its education programmes. What attracted me to the company was the quality of these courses – they really are second to none. I’ve a background in internationalising and growing businesses, working with owners and founders, and I hope to do that again here.”