This week Bvisible launched the PR campaign behind the novel ‘Sligo – Who Knew?’ tourism initiative.

“Sligo – Who Knew?’ is encouraging Sligo people and those visiting to share their experiences of the county through social media and help others discover Sligo from an insider’s eye view.  It invites people to share hidden gems, exciting things to do, great food haunts, music sessions and quirky facts turning locals and visitors into a marketing force.

The campaign launch was accompanied by some fun and lively pictures from our photoshoot on Sligo’s beautiful Streedagh Beach – a highlight was making the front page of the Metro Herald with this eye-catching pic that was all about losing your head to Sligo. The shoot produced a multitude of great pics which we expect to see popping up elsewhere throughout the campaign. 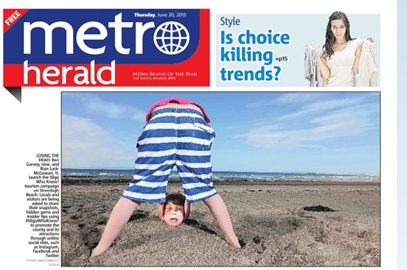 Other excellent coverage included: The Sligo Weekender and the Business and Leadership website.

So head to Sligo and have your tips and any useful nuggets from your trip posted onto the campaign website by using the #Sligowhoknew in your social media posts on Facebook, Twitter, Instagram, Google + and Vine

Sligo is this week launching a unique marketing campaign to turn locals and visitors into a marketing force for the county. The campaign encourages Sligo people and those visiting to share their day-to-day experiences of the county through social media and help others discover Sligo from an insider’s eye view.

‘Sligo – Who Knew?’ aims to capture how Sligo and its many attractions are surprising, adventurous and fresh. Through various online social channels – including Instagram, Facebook and Twitter – it asks locals and visitors alike to share their take on hidden gems, candid snapshots and insider tips, using the hashtag #SligoWhoKnew?. Those tips, videos and unique experiences will then be featured on the campaign website whoknew.sligotourism.ie.

As well as social media the €170,000 marketing drive encompasses PR, print, radio and television. The campaign is targeting the weekend getaway, activity holidays and family breaks’ markets looking for unique and diverse experiences. The work is driven by research in summer 2012 with visitors to Sligo who said, among other things, that they were “surprised and blown away” by the county’s beauty and attractions and that they “never knew” what Sligo had to offer.

The campaign is coordinated by a joint public and private sector collaborative network – Team Sligo – and funded by contributions raised from tourism, retail and service business interests with support also from Fáilte Ireland and the LEADER programme.

The thinking behind  ‘Sligo – Who Knew?’ is that it is about connecting with the holiday maker by highlighting, contextualising and captioning the many thousand areas of natural beauty, activities, places to eat well, markets, festivals and, above all, the engaging wit and helpfulness of the people, all summed up in the tag line

The visitor’s experience tells the story of Sligo better than anything else. The research verified what we were hearing across the tables and the counters – that Sligo is a hidden gem of many sides. Rather than imagine that in generic marketing materials, we are looking to get the outside world to see Sligo in a more accessible, personal and amusing way. We are relying on the experience of the visitor and the advice of the locals – the proud ambassadors of their homeland and those who know the true gems that make a holiday memorable.”

Annie West – illustrator, Sligo woman and one of the ambassadors for the initiative – says: “I’ll be doing my best to get Sligo people and visitors involved and using the hashtag ‘SligoWhoKnew?’. Like many who hail from Sligo I want to help people discover the amusing and unique peculiarities of Sligo – things like how to get to Maugherow without a map and rescue helicopter, what not to say at the grave of a Nobel Laureate and where we keep the secret stash of biscuits.”


SOME INTERESTING ‘SLIGO WHO KNEW’ FACTS

2)   Yeats was using Sligo place names in his writing from the 1880s right down to the day before his death in 1939 – Benbulben, Knocknarea and Glencar on at least 11 occasions in his works. He also writes about the mythology and the whole beauty of the Sligo landscape. Mentions of that landscape, from Glencar to the Lake Isle of Innisfree and across to Knocknarea, is unparalleled in literary history.

4)   In May 800 race places for the 2013 Warriors Run were snapped up in just under 2 hours causing the website crash. The 15k run from the beachfront in Strandhill to the top of Knocknarea and back attracts runners from all around the country and from around the world.  One of Ireland’s toughest competitive races, runners will converge on Strandhill on August 31st to follow in the footsteps of Queen Maeve’s ancient warriors.

5)   Sligo has about one-seventh of all the megalithic tombs in Ireland. The most important megalithic complex in Europe is in this area. One of the cairns in Carrowkeel has a roofbox similar to Newgrange (but older than Newgrange), that allows light to enter into its chamber during the Summer solstice as opposed to light entering the Newgrange tomb during the Winter solstice. The cairn in Carrowkeel has the only other known “roofbox” discovered yet apart from Newgrange.

6)  About 3000 Barnacle Geese arrive in October to spend the winter in North Sligo. The Ballygilgan Nature Reserve is one of the best sites in Ireland for seeing these geese in winter. The geese breed in Greenland in the summer and spend the winter in Ireland. They graze in Lissadell every winter until April, spending every night on the island of Inishmurray.

7)  A Sligo man pioneered atomic theory: In 1789 26-year-oldColooney man William Higgins published a book laying out Higgins’ own ideas about what he called the “ultimate particles of elementary matter” and how they combine or react to form compounds. Nineteen years later English scientist John Dalton published a more detailed atomic theory, which provided an explanation of all the experiments done so far on chemical reactions.  Dalton was credited with discovering the Atomic Theory, a fact that annoyed Higgins – he continued to claim that it was his idea until his death in 1825.

*Background note:
The concept of Team Sligo evolved from a breakfast gathering of the Dublin Based Sligo Diaspora in October 2009 conducted by Sligo Chamber and the Western Development Commission. Shortly afterwards a group of individuals representing both private and public sector bodies and interests came together in Sligo hotel to discuss how things could be improved for Sligo Tourism. It was decided that the first requirement was to create a brand for County Sligo that was real and authentic, different from the competition and appealing. A second and related requirement was the need to raise funds to promote that brand.

Underlying both of these two fundamental requirements was the clear intention that Team Sligo Tourism would not displace the activities of the existing tourism structures within the County. Rather, it would seek to build a collaborative approach that would add coherence to those activities. 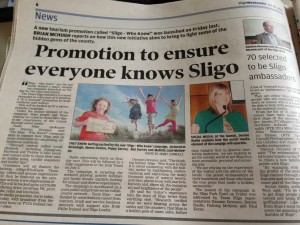 Coverage in The Sligo Weekender 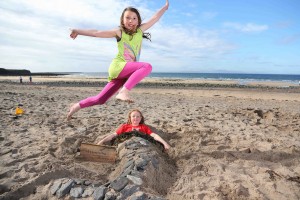