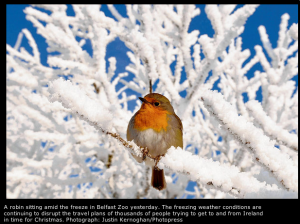 An Irish subsidiary of Google is forwarding multimillion investments to data centres in such locations as Vienna, Kuala Lumpur, Cairo and Bermuda, according to company filings Colm Keena. http://tinyurl.com/23uxpfs

Sony has begun a roll-out of its “cloud-based” music streaming service with an initial launch in the UK and Ireland, in what it hopes will be a challenge to Apple and Google as digital music moves from hard drives to the internet.http://tinyurl.com/2uk49e8


A ground-breaking new study by the Central Statistics Office has revealed that life expectancy is closely linked to the affluence of your surroundings, with people living in the most deprived areas dying much younger than those in more privileged areas. – Aideen Sheehan http://tinyurl.com/37hqa3l

New documents released by the WikiLeaks show that a senior executive at Shell Ireland said they had no plan B if refused planning permission for the controversial gas pipeline from the Corrib gas field. – Shane Hickey


How to make the most of the post-Christmas sales with bargain-hunting tips from Carrissa Casey. http://tinyurl.com/33r9a3x

The best ways to cut down on food waste over Christmas from Tina Leonard. http://tinyurl.com/2wc2ftr

The outlook for business is more positive now than at any point over the past three years according to Enterprise Ireland. In its end of year statement, it said its client companies recovered 70 per cent of the losses made in 2009, mainly through exports. – Peter Flanagan http://tinyurl.com/2w2f5jc

ESB has made a €1 million donation to the Society of St Vincent De Paul, which has reported a 35 per cent increase in calls for assistance this year.

A computer game addict in South Korea, who spent 10 hours a day bringing up virtual pets, has been arrested on suspicion of killing her three-year-old son after his crying disturbed her post-game nap.- Leo Lewis

A new restaurant has opened in China where the servers, entertainers and greeters are all robots. http://tinyurl.com/2w4q76a