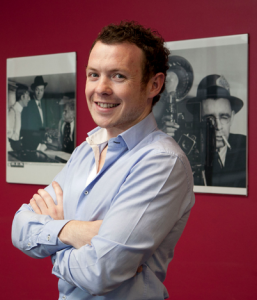 This week we managed to achieve some great coverage for GrabOne.ie, the Irish daily deal website celebrating two successful years in business this week.

Sarah McCabe from the Independent also spoke to Ruairí and wrote a great piece for The Irish Independent’s PostScript section.

The Daily Star, Metro Herald and Evening Herald also weighed in with pieces on the company’s birthday celebrations. 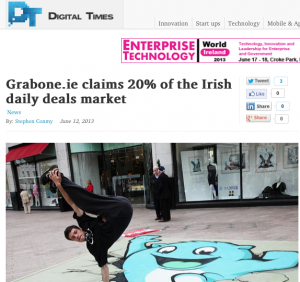 The company is holding a birthday bash in Dublin today so look out for pictures from the event.

With €20,000,000 being spent on deals in the 2 years since the company’s launch it seems our hunger for great daily deals is as voracious as ever.

GrabOne to Save Customers Over €1 million in One Week

The lure of a bargain has never been stronger and the way in which people seek these out has changed considerably in the past two years.

One company playing a part in this evolution is Irish daily deal website Grabone.ie, which this week marks two highly successful years in business and a 20% share of the daily deal market in Ireland.

To celebrate, the company is launching a week-long campaign today to save its customers over €1 million by stepping up the number and range of deals on offer and running a series of real world promotional offers and events throughout the week.

Items considered luxury items in recessionary time – such as weekends away and eating out – have become affordable with GrabOne and some of the more notable deals sold through the website to date have been:

Many customers have bagged over 100 deals each with a few managing to save over €10,000 through the website.

For businesses GrabOne has become an integral part of their marketing strategy,” adds Ruairi Doyle. “Getting their name and products in front of customers and offering discounts builds brand loyalty and much sought after repeat business.”

Half a Million Customers and Rapid Growth

GrabOne offers things to do, see, eat and buy at prices at up to 90% off recommended retail.  A customer signs up via e-mail and every day a new deal is advertised.

In two years the company has grown rapidly and now boasts over 500,000 customers – known as Grabbies – who make a purchase every 60 seconds. Two spin-off websites have also been added to its arsenal of online deals destinations – GrabOne Escapes for travel deals and GrabOne Store for product deals.

Speaking of the company’s success, which has seen GrabOne increase staff numbers from an initial 5 to 40 people today, General Manager Ruairi Doyle, says:

“We started this business when bagging a bargain was something to boast about rather than a purchase to hide. This word-of-mouth has helped us build a following of over half a million subscribers and thousands of happy partnerships. Couple that with that our very passionate team who work tirelessly with fantastic businesses to give our customers the best deals and you’ve a great recipe for success.”

Launched in 2011, GrabOne is owned by a joint venture between Independent News & Media plc and IdeaHQ Ltd. Located in Dublin the company employs 40 people, is hugely successful and offers deals across Ireland through a range of websites – GrabOne.ie, GrabOneEscapes.ie and GrabOneStore.ie